A Series of Discoveries: All Saints Chapel Artwork

This spring, a vacant office in St. Charles became the temporary workspace for Carroll College’s newest artist-in-residence and creator of stained glass artwork for the All Saints Chapel, Debora Coombs. An artist and instructor with 35 years of stained glass practice and education, Coombs spent two weeks on campus engaging with students, meeting with architects and collaborating with Campus Ministry.

Carroll College Chaplain and Director of Campus Ministry Fr. Marc Lenneman first reached out to Coombs after discovering her work online, and the relationship developed gradually over a series of phone calls. For a project of such importance to the spiritual center of campus, both artist and institution were looking for the right “fit.”

I always meditate in the mornings. Fr. Marc would tell me a little bit about the project then I’d be sitting in my meditation room and I’d see things in my mind, then I’d tell him about it. Then he’d tell me a little bit more about the project. We had this little thing where we were each only revealing so much at a time. The more we talked to one another, the more we realized that my own interests and the way I like working is so appropriate for Carroll’s project.

Coombs was not coming simply to fulfill a job for Carroll College—this became an inherently collaborative project.

Coombs’ work is rooted in geometry and employs methods and tools dating back to Medieval times. When conceptualizing the two stained glass windows that flank the chapel’s crucifix, the San Damiano cross, Coombs reached across centuries. “I wanted to make a geometric analysis of the cross to find out how it would have been drawn in medieval times and incorporate that into the composition.” After studying the San Damiano cross, she realized the halo of the cross held the key to its geometric core. Of the revelation, Coombs said, “It was quite exciting to figure out because it’s not like I created it, so much as I’m discovering something that already exists.”

She shuffled through a stack of papers until she found a series of circular patterns: the vessel of the fish, or the vesica pisces. She took out a drawing compass and gave a mini-lesson in sacred geometry. 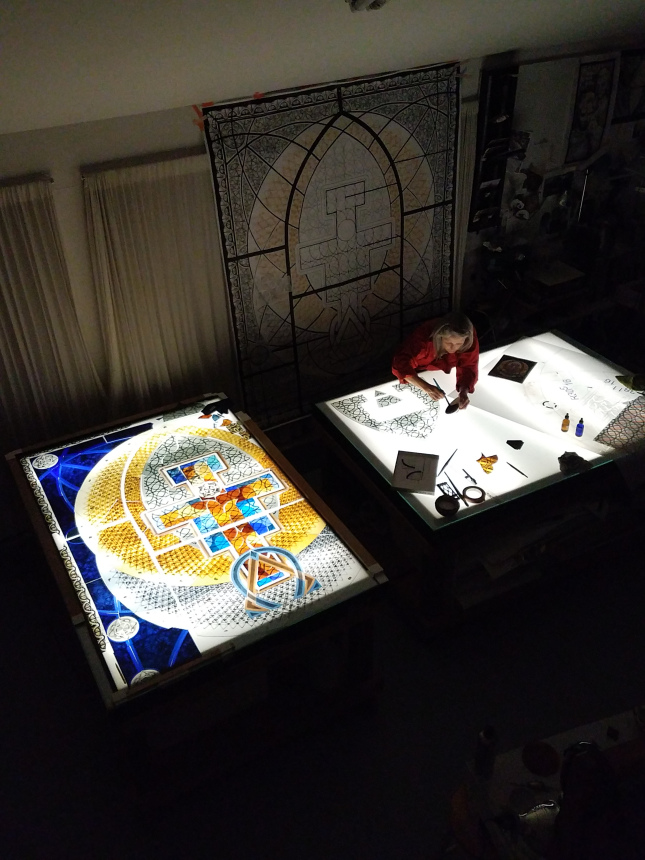 “If you think about it, without a ruler or a measurer, in the old days all you had was this compass. You draw a circle, then you take the point and you put it on the perimeter and you draw another one. And this is the shape that is generated and it’s called the vessel of the fish.”

“It’s as if you’ve got two cells that divide. It shows the beginning of everything. The circle represents the totality of God and everything that exists, it’s unbounded, and this is creation beginning to generate.” She drew one more circle, completing the trinity.

Another geometric element that papered the walls of her office is known as the Breath of the Compassionate. This sacred pattern is based on a repeating and overlapping system of four that gives the illusion of infinite contracting and retracting, or, inhaling and exhaling. Coombs pointed out the pattern in a thick book on her desk and gave a small smile. “It’s a beautiful concept.”

Still in the process of discovering, Coombs has yet to commit to the pattern. “Some of the structure of this composition may come in here somewhere, I’m not quite sure yet.”

The two windows will be a “shadow, or an after-image of the cross. The alpha and the omega, which is what these two windows represent, contain the crucifix, but the cross will still be the focus of your attention.”

Perhaps the most unique artwork created for the chapel will reside in the prayer chapel, which is located behind the alter, where Coombs will employ a pattern and technique she has been studying and perfecting: Penrose tiling.

“Though I’m someone who’s spent my entire life making art, I’m really interested in math. I was 60 last year, and I thought, ‘you know what, it’s time to do the things I really want to do.’ So, I’ve gone back to working on mathematics, and for a couple of years I’ve been working with a computer scientist and mathematician, building these mathematical models.”

A corner of Coombs’ workspace is covered in the repeating, dizzying pattern, a two-dimensional projection of a five- dimensional figure discovered by British mathematician and physicist Roger Penrose in the late 1970s. “This is what got Fr. Marc interested. He was interested in my skill in stained glass but it was talking about this geometry and mathematics in the chapel that got us connected.”

As the artist launches into a highly technical explanation of the theory behind Penrose tiling, it becomes clear that her passion for this project is inspired by the interdisciplinary relationship between art, mathematics, and spirituality, deepening her connection to Carroll’s mission to provide for students the means for full realization of a dual goal of vocation and enlightenment.

“What we’re working on is something that presents infinity, the intangible. It’ll be some sort of mosaic, some sort of little pieces, some sort of pattern that allows you to lose yourself in it.”

Interested in learning more about Debora Coombs and the theory behind her art? Visit coombscriddle.com