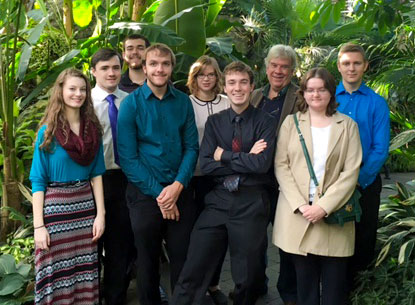 Photo caption: The freshman Talking Saints during their tour of the jungle at the Muttart botanical museum in Edmonton.

“That’s both surprising and delightful for just a quartet of students,” said Northup.

“The Canadians welcomed us warmly and even seemed pleased we won,” said Northup. “The host Gabi, who debated at Carroll in an exhibition last year, even put up a few of our debaters in her gorgeous family home, just to save us a few dollars. They were so gracious.”

Carroll advanced three teams to the semi-finals. Joining Stumbo and Thielman were Katie McNichol of Vancouver, Washington, and Amber Griffin of Idaho Falls, plus Haley Meredith of Jerome, Idaho, and her partner Nick Taffs of Helena. Griffin and McNichol joined the winning Carroll team in finals.

In World Debate in BP format, four teams participate in each debate.

Before the tournament started, the team toured the Muttart Conservatory, which features “biome” pyramids, each with its own eco-system including botanical gardens appropriate to the climate: temperate, arid and tropical. African stone sculptures were displayed amidst the exhibits.

“Muttart is a national treasure,” said Northup. “I think we liked the jungle the best. Frank was contemplating staying there permanently.”