In May, Monsignor celebrated his 70th anniversary of his 1952 Carroll graduation with classmate Dr. James Quinn. Also pictured during Commencement weekend with Betty Magnus '62 at the Golden Grad dinner.
Thursday, July 14, 2022 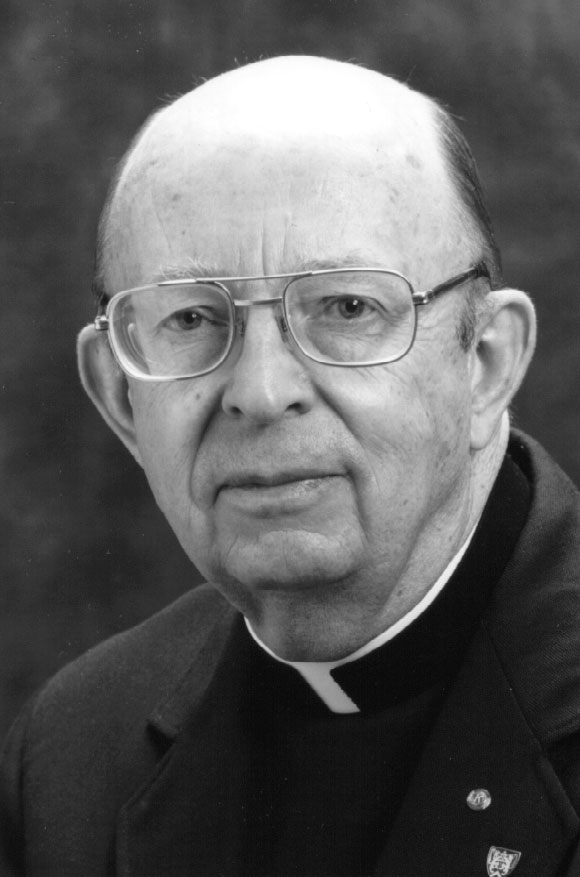 Monsignor Joseph D. Harrington, 91, died of natural causes at his residence in Helena, Montana, on July 7, 2022.

Joseph Dennis Harrington was born in Butte, Montana, August 24, 1930, to Joseph D. Harrington, Sr. and Veronica Bear Harrington. Later Florence Pohndorf Harrington became his stepmother. He attended St. Ann and St. John the Evangelist grade schools and graduated from Butte High School in 1948. He earned his BA degree from Carroll College in 1952, and studied at St. Thomas Seminary, Denver, Colorado. He was ordained as a priest by Bishop Joseph M. Gilmore at the Cathedral of St. Helena on May 19, 1956.

Father Harrington earned a MS degree in 1958 and a PhD in 1960 from The Catholic University of America. He did advanced studies at the Oak Ridge Institute of Nuclear Studies, Special Training Division in 1960 and in 1977. His professional memberships include Sigma Xi, American Society for Microbiology, American Association for the Advancement of Science, and the American Institute of Biological Sciences.

Beginning in 1960, Father Harrington served at Carroll College; as Instructor, Associate Professor and Professor of Biology, as Dean of Men and Dean of Students (1961-1965), as Dean of Studies (1965-1968), as Academic Dean and Vice President (1968-1969), and as President (1969-1974). After a sabbatical year at The Catholic University of America, he was Professor of Biology until he accepted Senior Status in 2000. Also at Carroll College, he served as Episcopal Vicar for Carroll College from 1978-1999. In 1983 he was elected to the Board of Trustees, serving for sixteen years. In 2019, the Board of Trustees conferred Presidential Emeritus status to Monsignor Harrington.

He was designated a Prelate of Honor (Monsignor) by Pope John Paul II on May 25, 2000. While in Senior Status, Monsignor Harrington served as a priest at Carroll College and as priest-substitute for various parishes in Montana. From the Autumn of 2005 through November 2019, Monsignor served as Episcopal Vicar and Delegate for Senior Status Priests in the Diocese.

Monsignor was a long-time member of the Helena Kiwanis Club, serving as president in 1977. From 1969 to 1980, he was a member and then chairman of the Merit System Council of the State of Montana. He later served on the Board of United Way of Lewis and Clark County.

Father Robert Hall will preside at the Vigil at the Cathedral of St. Helena on Sunday, July 17, at 5 pm. Bishop Austin A. Vetter will celebrate the Funeral Mass at the Cathedral of St. Helena on Monday, July 18, at 11 am. A luncheon will follow at 1 pm at the Carroll College Campus Center. Burial will be at the Priests’ Plot at Resurrection Cemetery at 10 am on Tuesday, July 19. Father Robert Hall will celebrate a Memorial Mass for his uncle on Saturday, July 30, at 11 am at St. John Church in Butte.

Obituary courtesy of the Diocese of Helena