Math Debate Under the Stars

As a part of our series of ongoing math debates, two favorite Carroll Carroll professors, Dr. Kelly Cline and Dr. Eric Sullivan, faced off on Guadalupe Hill under the setting sun on September 23, 2021 to tackle the question: "What is the greatest mathematical model of all time?"

Partnership with Keck Observatory in Hawaii 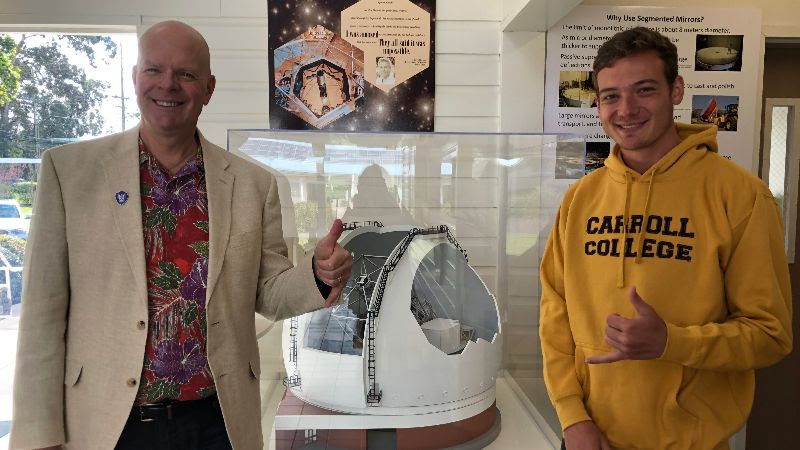 Carroll College alumnus, Roy Simperman ’62, and his wife, Frances Simperman, have played a very important role in helping Carroll College’s Data Science Program form a special partnership with the W. M. Keck Observatory on the Big Island of Hawaii. The Keck Observatory telescopes on Mauna Kea in Hawaii (14,000 feet above sea level) are the world’s largest optical and infrared telescopes. Their mission is to advance the frontiers of astronomy and share their discoveries, inspiring the imagination of all. Read more The Consortium for Mathematics and Its Applications (COMAP) recently announced the results of the annual Mathematical Contest in Modeling (MCM) & Interdisciplinary Contest in Modeling (ICM), held in January 2019. Three of the five Carroll College teams competing in the competition placed, at a minimum, in the top twenty-three percent of all participants.

One of Carroll’s teams was ranked as “Meritorious Winners,” placing them in the top 7% of all teams. The Meritorious winning team of Terry Cox, senior, math and data science major from Spokane, WA, Sabrina Crooks, sophomore, biology major and math minor from Nine Mile Falls, WA, and Shirley Davidson, sophomore, math, computer science and data science major from Escondido, CA selected to plan for an emergency evacuation of the Louvre Museum after six hours of deliberation.

On February 21, 2019, Dr. Kelly Cline and Dr. Eric Sullivan debated the question, "What is the greatest result of the mathematician Leonhard Euler?" Euler is widely recognized as one of the greatest mathematicians of the 18th century (and perhaps all time). He was a master at all fields of mathematics, and his results have proved to be impactful in the theory of calculus, number theory, complex numbers, physics, graph theory, astronomy, and music theory.

On September 27, 2018, Dr. Kelly Cline and Dr. Eric Sullivan participated in a lively and fun mathematics debate with questions from the audience and ending with a vote on the winner. Dr. Cline argued for the Greek mathematician Euclid of Alexandria and Dr. Sullivan contended that French mathematician Joseph Fourier was greatest of all time. In the spring of 2018 as a second year graduate student at the University of Nebraska - Lincoln, Carroll College alum Elizabeth Carlson (2016) was awarded a National Science Foundation (NSF) Graduate Research Fellowship. The NSF awards "outstanding graduate students in NSF-supported science, technology, engineering, and mathematics disciplines who are pursuing research-based Master's and doctoral degrees at accredited United States institutions." Elizabeth states, "I am very excited to use the resources afforded by the fellowship to spend more time on research. I want to thank the faculty of Carroll College and the University of Nebraska - Lincoln for their unending support and encouragement."

Math in the Mountains course featured in Carroll Magazine

"One of the greatest strengths of the Carroll math program has always been its focus on modeling and ‘real world’ applications,” says Dr. Eric Sullivan, assistant professor of mathematics. “In almost every class we offer, students work on a project with some sort of real-world application. This new Math in the Mountains course takes that one step farther.” Read more of this story 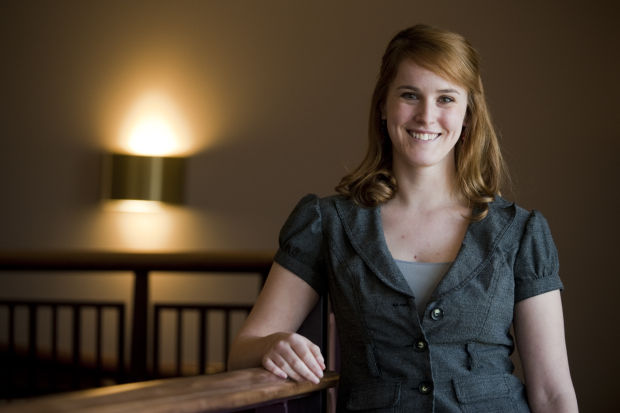 Helena native and soon-to-be Carroll graduate Emily Speranza is breaking the mold with her math and biology double major by pursuing a doctoral degree in a field she says is dominated by men.

In the fall, she is starting a fellowship, which includes full tuition and a stipend, at Boston University, where she will peruse a doctoral degree in a field called bioinformatics.

“It’s computational biology,” she said on a recent afternoon in Helena. She explained the field involves doing a lot of programming for data analysis, data mining and “basically doing biology on a computer.”

She says she is just one of two female first-year students enrolled in the program.

Read more of this story

In a twist of wickedly executed timing, Carroll math grad Sarah Reehl (’13) is featured in a Scientific American blog post entitled "Zombie Fever: A Mathematician Studies a Pop Culture Epidemic".  Reehl, who is currently a mathematics graduate student at Utah State University, was intrigued by the prevalence of zombie fever in popular culture and subsequently used the undead as the basis of her undergraduate thesis. 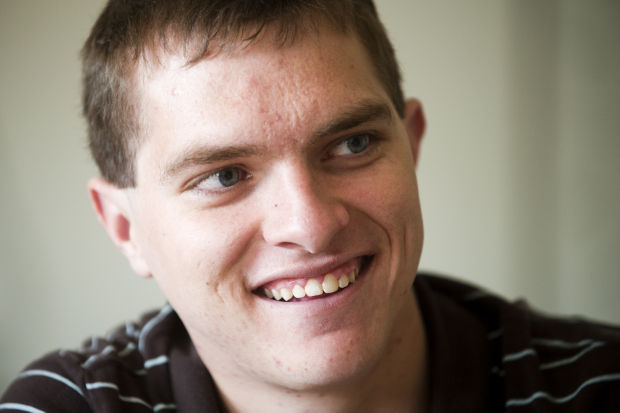 John Chart and Ryan Swenson are perfect examples of the people honored each year by the Helena Education Foundation during the organization’s Celebration of Excellence banquet. Chart has been teaching math for 25 years, 17 of them at Capital High. Swenson, his former student, just graduated from Carroll College Saturday and will begin a career teaching math this fall in Rigby, Idaho.

They were both honored by the Helena Education Foundation in 2009, and Chart is being honored again this year as a Distinguished Educator.

Each year the Helena Education Foundation honors a small group of graduating seniors for their academic achievements and civic engagement, naming them Distinguished Scholars. Each student then names an educator who has been a particularly positive influence on his or her life and then that educator is also honored by HEF. The organization also honors a group of graduates as Distinguished Achievers; they are nominated by their teachers, who are also honored during the banquet, for various academic or extracurricular achievements or for overcoming obstacles as students. Read more of this story

Carroll’s newest concentration in the mathematics program is in actuarial science.  Actuaries use mathematical models to help make decisions about investments and insurance.  This is an exciting and rewarding career choice in a field that is rapidly growing. Currently, two students are interning at local firms, and the Society of Actuaries just approved our course work in support of Applied Statistical Methods.  For more information about this career path, visit BeAnActuary.org.